It’s always fun to see the actual settings depicted in historical novels and time travel epics. We’d like to invite you to join us on a tour of some of the principle locations in Morgan O’Neill’s Italian time travel series. The story begins in present day Santa Lucia, Italy, a village located in the northern foothills of the Apennines. Through dark magic, our heroine, Gwendolyn Godwyn, is pulled back to war-torn tenth century Italy. Follow her from the medieval church where she time traveled, to the towering cliff of La Rocca and its sinister fortress, and then on to the gleaming castle of Canossa, home of our hero, Lord Alberto Uzzo.

The excerpts are from The Other Side of Heaven and its sequel Time Enough for Love.

Our first excerpt from the Other Side of Heaven takes place in the fictional Italian town of Santa Lucia. Our heroine, Gwen, is there to do genealogical research and find her long-lost relatives. Little does she know, the man she is about to meet will play a pivotal role in her future – in the past.

Gwen sipped her cappuccino. A nicely dressed man came into view and bounded up the church steps. The girls at the next table giggled and pointed. She focused on the guy as he unlocked the door and slipped inside. Possible “nice bod” sighting. She listened to the breathless Italian chatter:
“Magnifico... he is so beautiful. Like a Greek god.”
“Sì, an Adonis. And that blond hair, those green eyes, bellissimo.”
They giggled again and continued to speak excitedly about the tour guide.
Gwen grinned. From this distance anyway, the girls seemed to have pretty good taste. She usually preferred tall, dark, and handsome types, yet she’d heard a lot about the attributes of northern Italian men. Tall, fair, and handsome might just fit the bill; that is, if he were tall enough.
The Italian girls were still chattering, and a spark of competition flashed through Gwen. She found herself wondering how many tall California blondes had given these girls a run for their money.
Tucking five Euros under the saucer, she gulped down the rest of her cappuccino and left the table. An eye-candy tour guide. This was going to be more interesting than she thought.
Crossing the piazza, she climbed the church steps and arrived at the main doors just as they opened for business. Inside, she looked around, but saw no trace of Nice Bod. She bought her ticket and waited as the signorinas and a group of British tourists got in line.
Suddenly, the doors to the nave opened from within and she gaped. The tour guide looked a lot like her cousin back in California! That much of a resemblance couldn’t be a coincidence, could it?
The girls burst into twitters again, one fanning herself dramatically, just out of his line of sight. Gwen felt like joining them, but for a different reason.
She had to keep telling herself, Look normal, look normal, he might be family. You can’t hook up with a relative. His badge says his name is Stefano. But what’s his last name?
She needed to find out.


In addition to our principal romance between Gwen and Alberto, we have woven in the historical story of Queen Adelaide of Italy and her fight to retain her crown against the efforts of the evil usurper, Lord Berengar. This excerpt from The Other Side of Heaven takes place after Adelaide is kidnapped and facing a terrifying future.

“Let her see.”
Berengar’s voice startled Adelaide.  She had been riding blindfolded and bound at the wrists since her capture, now untold days in the past.
Hands grabbed her, forcing her sideways, and she was pulled off the horse. Someone wrenched the cloth from her eyes. Momentarily stunned by the burst of daylight, she squinted, trying to get her bearings.
“Look at it,” Berengar demanded. “This is where you shall die if you do not do my bidding.”
A dark castle loomed before Adelaide. She felt dizzy gazing up at the sheer cliff face of La Rocca, the mountain of stone forming the foundation of her enemy’s fortress. She had heard of this place, been told of the sinister goings-on, its terrible dungeons. She shuddered.

In book two of the series, Time Enough for Love, Gwen is determined to find a way to rescue Queen Adelaide from Berengar’s fortress.

Gwen glared at the towering cliff of La Rocca, black against the night sky. It loomed before her, the castle at its apex evil personified. The fortress of Berengar and his wife, Willa of Tuscany. The place where Queen Adelaide was being held captive and cruelly mistreated, the very spot where the queen would die if Gwen and her companions could not set her free.
Mission impossible?
Gwen’s heart blazed with rage and fire. She vowed to rescue Adelaide, no matter the cost, then slipped into the forest and headed back to find Alberto and his men.
With each step, she felt his presence growing stronger. Alberto. Dark, smoldering eyes. Tall, with broad shoulders. Sober and intelligent. His sensual smile for her alone.
Despite the terrors she had encountered in this dark place and time, she felt hope because of his love. Alberto, Lord of Canossa, was the queen’s champion, but Gwen knew there was strength in numbers.
I will play a role in her rescue. She pressed on toward Alberto’s camp.
Mission accepted.

Several scenes take place in Pavia’s grand basilica, including the wedding of our principal historical couple, Otto and Adelaide. This excerpt is from Time Enough for Love.

December 25. It was late, an evening wedding, the scene glowing with candlelight and hope, the air redolent with sweet incense, the future for the royal couple beckoning and so very bright.
In St. Peter’s Church of the Golden Ceiling, King Otto and Queen Adelaide were participating in the velatio, an ancient ritual where the bride and groom knelt beneath the nuptial veil and received God’s blessing. Pope Agapetus II stood over them, hands raised in prayer. All looked resplendent, Otto and Adelaide in silken robes of Imperial Purple, the Holy Father’s brocaded vestments crimson and trimmed with ermine.
Gwen kept her eyes on the king and queen, but she could feel Alberto’s presence, feel his eyes upon her.

Since our epic Italian time travel series is a romance, we leave our readers to ponder who will get married next at the Church of the Golden Ceiling… 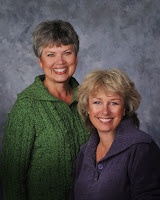 Morgan O’Neill invites you to join Gwen and Alberto on their epic adventure from Santa Lucia to La Rocca, then to Pavia and beyond.

If you have comments or questions about medieval Italy, we would be glad to answer them. Thank you and happy reading! 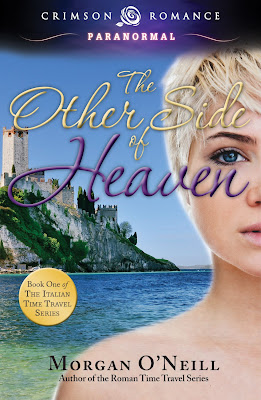 About Book One:
Californian Gwendolyn Godwyn seeks to learn her family’s history and hopes to restore the bond that once existed between her Italian forebearers and those who live in America. While visiting her ancestral Italian town, Gwen is caught in a violent earthquake and inexplicably thrust through time.
At first refusing to believe what has happened, she nevertheless uses her wits to survive, donning a monk’s cowl to hide her identity as a woman. Ripped apart from all she has ever known, Gwen finds herself in the midst of brutal territorial battles in an era she once blithely called “The Dark Ages.” When the golden Italian summer of 951 emerges from the strife and gloom, Gwen joins forces with a cadre of gallant men, allies in the struggle against the evil nobles, Willa of Tuscany and Count Berengar, kidnappers of Italy’s rightful queen, Adelaide.
Along with Father Warinus and Lord Alberto Uzzo, Gwen seeks to rescue Adelaide and restore her kingdom. In the midst of this great adventure, Gwen falls in love with the complex and passionate Alberto, to whom she reveals her identity as a woman. But can Alberto learn to love her strong and independent nature and help Gwen in her quest to discover her rightful place in time? 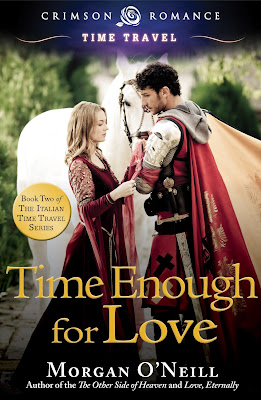 Through dark magic, Californian Gwendolyn Godwyn has been swept back in time to medieval Italy. There, she finds herself in the midst of a war between Italy’s rightful queen, Adelaide, and those who have kidnapped her and seek to usurp her crown. Risking her life, Gwen elects to play a pivotal role in the planned rescue.
In the chaos, she is drawn to the queen’s champion, Lord Alberto Uzzo, who battles not only their military foes but also his personal demons. Tested to the limit when he discovers Gwen’s true identity as a time traveler, Alberto nevertheless fights through his doubt and the whirl of superstition that surrounds this intriguing and strong-willed woman. Time is of the essence as the lovers seek to overcome the evil forces rallying against the queen they’ve vowed to save.
Will Gwen and Alberto be able to overcome the groundswell of danger to find time enough for love?

Other books by Morgan O'Neill:
The Roman Time Travel Series:
Love, Eternally, After the Fall and Return to Me.
Released in 2012
Publisher: Crimson Romance

Reviews:
To my complete amazement, an ending I did not expect made me say "wow." Time Enough for Love is a wonderful sequel to its companion, and a stand alone read worth any number of "wows"! - Leslie Garcia, author of Unattainable.

Alberto and Gwen’s relationship was one of the most touching and heartfelt romances, that I’ve read in a long time. The conflicts they endured in the story had me holding my breath one minute, and crying the next....Time Enough for Love by Morgan O’Neill is a must read!   - Angela Boudreau Searles, Satin Sheets Romance

Posted by Paranormal Romance Fans for Life at 3:00 AM