Reflection Characters by J.P. Sloan, author of The Curse Merchant 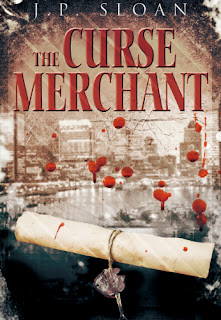 Stories are about characters.  This is a nugget of wisdom I received from a writing seminar several years ago, and I've taken it quite directly to heart. For all of the discussion of plot-driven versus character-driven stories, the truth of the matter is that without a believable, engaging cast of characters, no story will connect with a reader.


Beyond the protagonist, the antagonist, and the love interest, we so often find this cloud of secondary characters orbiting the central figures like lost satellites. These are the friends, the unrequited love interests, the henchmen, perhaps even family members. They create the canvas  from which main characters must rise. It's a staggering shame that they are so often underdeveloped and mistreated. The easy route for an author is to fully realize one or two main characters, and then fill in the background with two-dimensional types and tropes. However, without realizing it the author causes the main characters to suffer. Why?


Let's take a couple examples. Frodo and Samwise. Best friends. Both of a similar age. Both reared in the Shire with the same values and world views. One becomes a Ringbearer, the other is the Ringbearer's aid. No one can question that Frodo would never have survived the narrative without Sam. But what was the difference that prevented Sam from rising to the challenge in the way Frodo had? Frodo possessed a spirit of courage and daring that Sam lacked. Sam was dutiful almost to a fault, but given the active choice he would have left the task of destroying the One Ring to others. Frodo couldn't do that. Hence, Sam is a reflection of Frodo… he is the Frodo who would have stayed in the Shire, and perhaps would have burned with it.


What about villains? Let us consider Lord Voldemort and Lucius Malfoy. Both are wizards. Both have a burning hatred for "mudbloods." Both are capable of murder and torture. However, Voldemort becomes a living legend of evil, whereas Lucius remains a lackey, and ultimately fails to commit to the master plan. Malfoy's failures exist on several levels, but the distinction between the two is deeper than simple ability. Malfoy had a family. And when the Harry Potter saga came to a close, his connection to his wife and son remains intact and central to his being. One could argue whether Lucius was saved by his family in the end, but it is an obvious departure from the void that was Voldemort's heart.


In The Curse Merchant, my protagonist, Dorian Lake, is a single male, lives alone, and cultivates a healthy career crafting charms and hexes for a select clientele. He wears nice clothing, drinks expensive scotch, and drives an Audi. His best friend, Edgar, is also a hermetic practitioner, dealing in reagents and enchanted items from an antiques store in the countryside. Edgar drinks beer, wears floral print shirts, and has a family. The two characters deal in the same industry, but one would never imagine they were friends. When push comes to shove, however, Edgar has what Dorian doesn't… family. He is a kind of rock for Dorian to cling to. However, like Lucius Malfoy, Edgar's family keeps him from committing to the quest. When the fire hits the brimstone, Edgar can't be the hero. He's a father first.


So, one litmus test for a deeply immersive read is whether the reflection characters actually buttress the main characters. Whether we can clearly identify that one difference, that one quality that keeps them in the background. They are vital to our interest as readers, and if given a proper treatment, can mean the difference between a story you can read and a story you are drawn into.


Book Description:
Dorian Lake has spent years cornering the Baltimore hex-crafting market, using his skills at the hermetic arts to exact karmic justice for those whom the system has failed. He keeps his magic clean and free of soul-corrupting Netherwork, thus avoiding both the karmic blow-back of his practice and the notice of the Presidium, a powerful cabal of practitioners that polices the esoteric arts in America. However, when an unscrupulous Netherworker interferes with both his business and his personal life, Dorian's disarming charisma and hermetic savvy may not be enough to keep his soul out of jeopardy.


His rival, a soul monger named Neil Osterhaus, wouldn't be such a problem were it not for Carmen, Dorian's captivating ex-lover. After two years' absence Carmen arrives at Dorian’s doorstep with a problem: she sold her soul to Osterhaus, and has only two weeks to buy it back. Hoping to win back Carmen's affections, Dorian must find a replacement soul without tainting his own. As Dorian descends into the shadows of Baltimore’s underworld, he must decide how low he is willing to stoop in order to save Carmen from eternal damnation... with the Presidium watching, waiting for him to cross the line.


Excerpt:
I slid into the Cadillac, inspecting the interior for anything that could inflict bodily damage upon my person. Malosi slipped into the driver's seat, and pulled the car into a U-turn in the middle of Amity Street.


I watched Malosi as he turned north onto the MLK expressway, pondering the man. I wondered how deeply Malosi had delved into Osterhaus' world.


"You're a practitioner," I stated.


"I've been trained in the necessities. Just to do my job."


"Where did you receive your training, if you don't mind my asking?"


"Mister Osterhaus. Everyone in his employ has a basic understanding of hermetic theory."


"How many people are in his employ?"


Malosi lifted a brow behind his sunglasses.


I looked out my window, watching as the taller buildings of downtown Baltimore cast their shadows over us. This wasn't going to be a long drive.


"For talking to Osterhaus."


He cocked his head and considered the question for a moment, before responding, "Be polite."


He drove up Light Street and stopped in an alley between a tall bank building and a red brick row house. I tried to step out, but the door was locked. I had to wait until Malosi opened the door from the outside.


Once free of the Cadillac, I looked up and down Light Street, the clear sky above slowly succumbing to a front of overcast clouds. Malosi gestured me towards a flight of steps dropping below the street in the alley, leading to a basement entrance to the red brick building. At the base of the steps was a thick iron door with a wrought bronze knocker. Malosi pulled the handle and pushed the door open with a loud scrape.


"Watch your head," he muttered as I stepped into the dark room beyond the door. A low-hanging wood case crossed the lintel, and I eyed it as I entered Osterhaus' basement office.


Malosi closed the door, and my eyes adjusted slowly to the dim light. The case above the door was part of an intricate series of bookcases and display cabinets with leaded glass doors that wrapped two walls. The near wall to my right was covered in a tapestry depicting what I imagined was a scene of the Crusades. A solid, finely carved wood desk sat near the far wall, leather-topped and well-polished.


The room was dim, lit only by two gas coach lamps that flickered in a cased opening that lead to stairs slipping up and out of view into the building above.


Malosi pulled one of two green leather chairs from the front of Osterhaus' desk and held out his hand.


I nodded, and watched as Malosi disappeared up the flight of stairs with heavy footfalls.


The room was thick with the smell of frankincense. I recognized the aroma, though it was laced with other sharper scents I couldn't pick out. Cedar, perhaps. Something for wardings.


As I squinted up at the glass displays, I noticed several vials of blown glass set in neat rows upon the glass shelving. They resembled perfume bottles, the kind one buys at tourist friendly kiosks in Venice. I was on the verge of piecing together all manner of theories regarding the contents of those vials when I heard the upstairs door open, and two pairs of footsteps descending.


I stood up in time to see a short, thin man step into the room from the cased opening. He had a wiry frame, almost shriveled as if elderly, though his face and eyes were sharp. He had a hawk-like brow, jutting over clear blue eyes, sending bushy gray eyebrows up at angles towards a receding salt-and-pepper hairline.


He parted his thin, crooked lips and said, "Dorian Lake, I presume?"


His eyes narrowed, and he looked back at Malosi with a nod before proceeding into the room and behind his desk.


"Believe it or not, Mister Lake," he continued as he slid into his chair, "I've been meaning to speak with you for some time now."


I took my seat, giving Malosi a sidelong glance, making sure he wasn't holding a shotgun or baseball bat.


He stared at me with those piercing eyes, and the more I took him in, the more I realized that I really hated this man.


About the Author:
I am a storyteller, eager to transport the reader to strange yet familiar worlds. My writing is dark, fantastical, at times stretching the limits of the human experience, and other times hinting at the monsters lurking under your bed. I write science fiction, urban fantasy, horror, and several shades in between.


I am a husband and a father, living in the “wine country” of central Maryland. I’m surrounded by grapevines and cows. During the day I commute to Baltimore, and somehow manage to escape each afternoon with only minor scrapes and bruises. I am also a homebrewer and a certified beer judge. My avocations dovetail nicely!