Morgan O’Neill’s Roman time travel series begins in present-day Ravenna, Italy. Our heroine, Gigi Perrin, plays her flute in the Baptistery of Neon, an actual UNESCO World Heritage Site. It is the most ancient of Ravenna’s monuments, constructed circa A.D. 402. It is here that a curse placed on an ancient ring sends Gigi back through time.
The excerpts are from Love, Eternally, Book One of the Roman Time Travel Series, with the photographs courtesy of Wikipedia Commons. 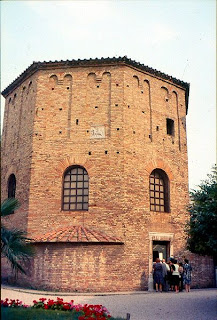 Photograph. Caption: Baptistery of Neon in Ravenna, Exterior, photo by Matthias Hollander.
Gigi stepped out of the Mercedes. Before her stood an octagon-shaped brick building, surrounded by a colorful garden. She could see the remains of the baptistery’s ancient door sunken partway into the ground. The structure had to be really old, if the original level was that far down. Gravel crunched beneath her feet, the sound of traffic from the nearby Piazza Kennedy fading with each step. Sweet, flowery air wafted over her. Outside the entry, a lone palm stood sentinel, surrounded by riotous sprays of orange and white gladiolas. Beside the door, a plaque read “Battistero Neoniano.”
She stepped inside. Sunlight poured through the windows, illuminating a pulpit, and recessed chapels lined the perimeter, the walls painted with frescoes. She looked up, slowly turning. Glittering above, richly colored mosaics rose to the top of the dome. There, images of Peter, Paul, and the other Apostles seemingly whirled toward a central golden medallion, where Jesus was depicted being baptized in the Jordan.
The building was late Roman and perfectly preserved. She stepped to the railing surrounding the empty baptismal font and was surprised by the drop, maybe ten feet down. “Wow,” she said, listening to the echo. “Hey!” She grinned, her own voice coming back at her, crisp and clear. The acoustics were perfect.
Gigi noticed someone had placed a wrought-iron candelabrum on the pulpit, and she guessed that was to be her stage. She flicked open the case latches and put her golden flute together. She couldn’t wait to play. 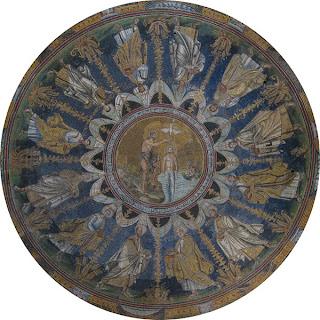 Photograph. Caption: Baptistery of Neon, Mosaic Ceiling, photo by Hay Kranan.
Gigi touched her grandfather’s ring through the bodice of her gown. It was perfect, wearing this old Roman ring, in this old Roman setting. She placed her lips against the cool metal of her instrument, enjoying the way her yellow diamond glittered in the candlelight. Her two rings. The past and the present, together. Perfect.
She blew softly. Musical notes lifted, filling the baptistery, and time passed without notice. Feeling her way through each song, Gigi let the moment speak to her, telling her what to play. When the last, passionate notes of “Time to Say Goodbye” echoed back to her, she felt a shiver of pleasure course down her spine. She looked up, surprised to see that sunset had faded into night. Except for the candlelit pulpit, the baptistery was dark, the frescoes obscured by shadow.
She turned to put her flute away, recalling the piece she had intended to play as an encore: Chopin's “Minute Waltz.”
“It would have been so perfect,” she said. “Ah, do it anyway.” Grinning, she took up her instrument as the groundskeeper appeared at the door. “Just a sec,” she said, holding up her flute. Shutting her eyes, she placed it to her lips and blew, imagining the notes tumbling out, like musical popcorn. Time flew, the ending sparkled. There. Done. Perfect!
Gigi laughed and bowed to the air, then heard a distant cacophony, a really badly done version of the “Minute Waltz.” Another flutist? But where? The baptistery was empty. Probably someone outside, a bystander. Funny. She raised her flute and played along, appreciating the musician’s struggle, wanting to help. Finally, she heard pure tone, matching hers note for note. Yes, that’s it––
A whoosh of air, a faraway cry. Gigi’s eyes flew open to inexplicable images, wavy, ghostly shapes: men in togas, women in Grecian-style gowns. The scene flickered in and out, like a broken TV set, and a weird roar filled her ears, like a freight train inside her head. The room suddenly spun, the floor opened wide, and she grasped for the pulpit––but fell headlong into a whirlwind of stars. 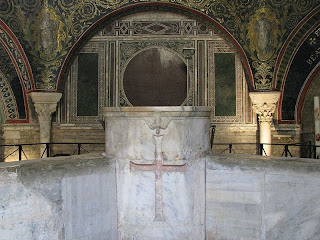 Photograph. Caption: Baptistery of Neon, Pulpit and Baptismal Font, photo by Testus.
Our hero, Quintus Magnus, has just heard a mysterious “phantom” melody playing in accompaniment with music being performed by Horace, Emperor Honorius’s slave-flutist. Gigi is about to “make her appearance” in ancient Rome.

Magnus squinted. Was it his imagination, or had the air begun to sparkle where the musician once stood? Rubbing his eyes, he cursed the effects of too much wine. This odd air reminded him of trips to his family’s salt mines, where the briny haze twinkled in torchlight, and he could smell it, taste it for days afterward, like tears upon his tongue.
By now, the extraordinary melody had faded, and Horace returned to the pulpit, but something was still decidedly odd. Magnus studied the flutist’s glimmering robes, the sparkles whirling around his brow. Was this a dream? Was no one else seeing this?
Horace placed his silver flute to his lips, listening as the phantom melody rose again. He tried a few notes, his attempt rough and too slow. Frowning, he took a deep breath and blew true. For a long moment, the music meshed.
Troubled, Magnus looked at Placidia, but she was conversing with several young women. The crowd once again grew lively, unaware of the strangeness he perceived.
When Horace let out a yelp, Magnus spun back around. The flutist was nowhere to be seen.
Magnus warily cast his glance about the room, looking for the absent musician, but the sound of a gasp brought his attention back to the pulpit. The air sparkled as before, but now a woman appeared, ethereal, glittering like the stars.
Magnus’s chest tightened.
She turned and stared at him, clutching a golden flute.
The air cleared and he let out his breath as she came into focus. Her wide green eyes blazed with an emerald fire, the whites so clear they held a tinge of palest blue. Her body was slim, her bearing regal, and he was instantly aware of her slightest movements: the trembling of her fingers, the sudden flicker of doubt in her beautiful gaze.
Her vulnerability unleashed a thunderbolt that surged straight to his heart.
Magnus took a step forward and her perfume floated to him soft as a cloud, enveloping him, the fragrance hinting of figs and something unfamiliar and warmly sweet. He breathed deeply. Who was this glorious creature, this––this divine . . . ?
Overcome, he felt compelled to drop to his knees, to worship her as a goddess, but his warrior’s instinct shouted No! He must not reveal his suspicions of her identity to anyone in this most Catholic court.
Magnus glanced at Honorius and saw the emperor lift his head. His face held a different expression than before, not lewd or wretchedly amused, but dark and dangerous, like a wolf sensing prey.
Morgan O’Neill invites you to join Gigi and Magnus on their epic adventure from Ravenna to Rome and beyond.
If you have comments or questions about ancient Rome, we would be glad to answer them. Thank you and happy reading! 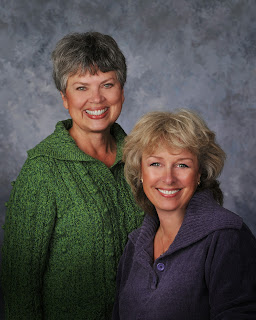 
A witch's ancient curse propels talented flutist Gigi Perrin back to A.D. 408, to the court of the depraved Roman Emperor Honorius and his admirable sister, Princess Galla Placidia. There, Gigi grapples with her disbelief about what has happened, and with the strange, new world of violent politics, social upheaval and barbarians straining at the very gates of an empire. Through it all, she must struggle with her powerful attraction to a pagan senator and military commander, Quintus Magnus, a man exotically different from anyone she has ever known. On the brink of a dark and war-torn age, Gigi joins forces with Magnus, battling to save a princess and her people, and ultimately finding love amid the chaos, before the fall of .

After the Fall, Book Two of the Roman Time Travel Series 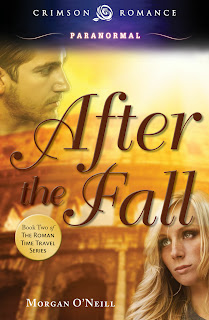 After the Fall ratchets up the tension as time traveler Gigi Perrin and her husband, the Roman warrior Quintus Magnus, join forces with the Visigoth King Alaric to march on . There waits Princess Galla Placidia, the admirable sister of the despicable Emperor Honorius. About to be forced into an arranged marriage by her brother, Placidia fears a bleak future, trapped in a loveless union.


In an attempt to save from barbarian invasion, Placidia puts aside her troubles and meets with Alaric’s delegation, which includes Gigi and Magnus, and the king’s second-in-command, the Visigoth prince, Athaulf. The attraction between Placidia and Athaulf is instantaneous and overwhelming, but theirs is a forbidden love, destined to fail because of implacable politics and impending war.


Bound by a friendship that transcends time, Gigi and Placidia must do whatever they can to protect the men they love, after the fall of .


Return to Me, Book Three of the Roman Time Travel Series 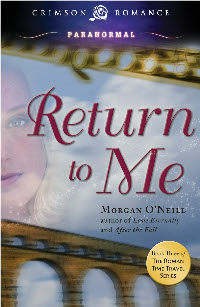 Return to Me finds time traveler Gigi Perrin happily settled into twenty-first century life with her husband, the former Roman senator and military commander, Quintus Magnus. Gigi has resumed her successful musical career, playing the flute for her adoring fans, while making her first foray into by creating the musical score for a feature film about the Roman emperor Nero.


At the film’s wrap party, Gigi is presented with a gift to commemorate her work: an ancient Roman ring depicting the goddess Victoria. Stunned, she and Magnus recognize it as the very ring that brought them together, and the one subsequently stolen from her and lost in A.D. 410. How did it make its way back to them? Magnus believes the answer is clear; sent it as a warning about their dear friend, Princess Galla Placidia. They start researching what happened to Placidia after Gigi and Magnus time traveled from the barbarous fifth century. To their shock, they discover Placidia's life took a series of terrible turns, culminating with the murders of her children.


Realizing they have no other choice, Gigi and Magnus prepare to embark on a perilous quest to go back in time and rescue them. But one ominous question remains – how can they save the children without altering the course of history?

Posted by Danica Winters at 6:00 AM

Email ThisBlogThis!Share to TwitterShare to FacebookShare to Pinterest
Labels: After the Fall, Love Eternally, Morgan Oniell, Return to Me, Time Travel Series