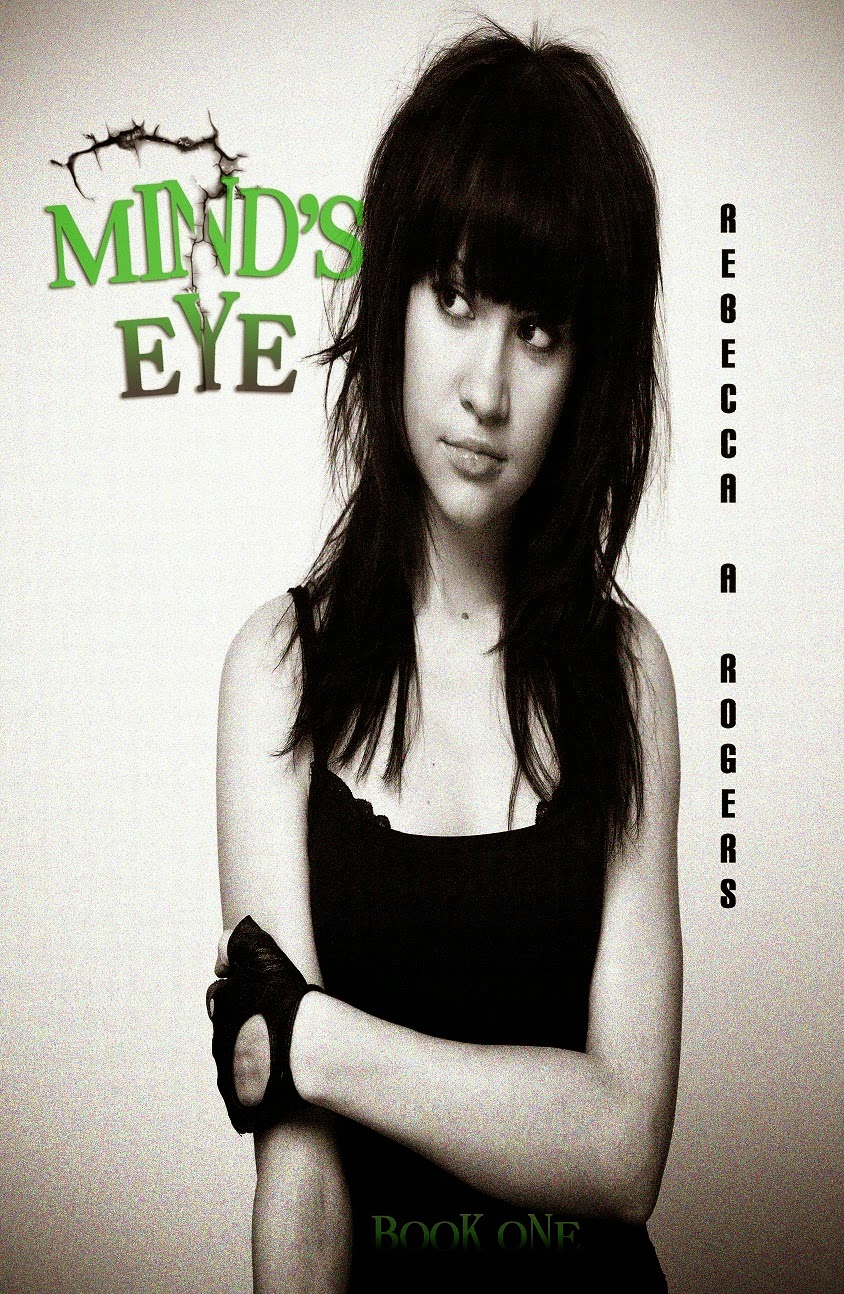 Mind’s EyeBook 1Rebecca A. RogersGenre: Paranormal (with romantic elements)Publisher:  Rebecca A. RogersDate of Publication:  January 1, 2014Number of pages:  284Cover Artist:  Rebecca A. RogersBook Description:Seventeen-year-old Kearly Ashling can travel anywhere her mind takes her—literally. Becoming Empress of the planet Cyeor and battling monstrous, otherworldly creatures isn’t a problem. Living among the elves on the Plains of Glasslyn has yet to be an issue, as well. Even touring normal places like Paris, London, Tokyo, and the Amazon Rainforest isn’t difficult.But traveling through her imagination isn’t just fun and games—it has consequences. Following a battle on the planet Cyeor, she’s visited by a guy who’s unimagined. He warns her to stop using her gift or they will find her. Kearly doesn’t heed the messenger’s advice and soon wishes she had. When the messenger finds her again, he transports her to the M.I.N.D., a corporation which specializes in “healing the psyche.” Once she’s inside the M.I.N.D.’s doors, however, Kearly realizes escaping is nearly impossible.Now, she must figure out the M.I.N.D.’s true intent, try not to fall for the irritating-yet-handsome messenger, and find a way to outsmart the organization before they stop her from ever imagining again.Amazon US | Amazon UK | Amazon CA | Amazon AU | BN | Smashwords | Createspace | iBook
Guest Post by author Rebecca Rogers

Music and the Writing Playlist

It doesn’t matter what country you’re from, or what language you speak, there is one thing that’s universal: the love of music. Which is why it’s no surprise readers adore seeing what their favorite authors listen to while writing. Which song or artist kept the creative juices flowing? What genre of music do they listen to? What mood does the music set? I’ve recently released my tenth book, and I know I couldn’t have completed many scenes without the aid of a playlist. Music has a tendency to relax our mind and body, help us forget our problems, and allow us to just drift along with the melody. For me, it’s all about envisioning
other worlds and losing myself in those daydreams. Music, much like reading, is an escape. So, without further ado, here’s the list of songs I listened to while writing Mind’s Eye:
“Endlessly” - Green River Ordinance
“Texas Rain” - Sleeperstar
“Ocean Wide” - The Afters
“Down” - Jason Walker (This was featured on an episode of The Vampire Diaries!)
“Our July in the Rain” - He Is We
“When I’m with You” - Faber Drive
“Telescope” - Graham Colton

I know. It’s an extremely short list, but I kept it on repeat throughout the entire writing process. More than likely, this playlist will stick with me throughout the remainder of the trilogy, and I’ll be tacking on a few more songs.

What’s your favorite music to listen to while blocking out the rest of the world?

Rebecca expressed her creative side at an early age and hasn’t stopped since. She won’t hesitate to tell you that she lives inside her imagination, and it’s better than reality.She’d insert something here along the lines of living in the Northeast, USA, or Europe, with her wonderful husband and their dogs, but these things haven’t happened yet. Instead, she’ll tell you she’s an avid gamer, chocoholic, coffee addict, animal lover, and owns way too many books and shoes.Author Contacts:Website/Blog | Twitter | Facebook | Goodreads
Posted by Paranormal Romance Fans for Life at 12:30 AM